The vagus nerve is the longest of twelve pairs of nerves that originate in the brain, serving as the brain’s central command in the fight against stress, inflammation and toxicity. The vagus helps regulate our “fight or flight” response, digestion, detoxification, various aspects of heart rate and blood pressure. Recent research indicates it also regulates our immune system and provides us with a neurological infrastructure that determines many of our emotional responses, enabling us to empathize with, bond with, communicate with and relate to others.

The longest nerve the body, the vagus nerve begins at brainstem, located near the base of the skull, and has branches which extend throughout the head and two branches which travel down the each side of the neck and extend throughout the body. It actually consists of nerve pairs; one nerve sends and the other nerve receives information. When it is under-active and/or under-developed, it is turning out to be one of the major contributors to symptoms of autism. It is part of what is called the autonomic nervous system, which automatically regulates functions that our mind does not consciously control.

The Autonomic Nervous System – Your Body on Autopilot 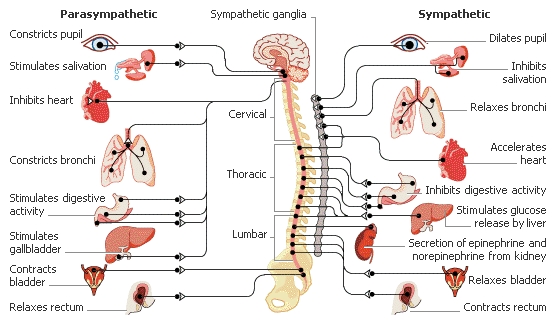 The Polyvagal Theory of Autopilot

Our three nervous systems are referred to by Porges as:

At this time, Polyvagal Theory appears to have been validated through several years of research and countless studies and is now being used as the basis of development of new treatments conditions such as as epilepsy and rheumatoid arthritis.

What we have in autism is a vagus nerve that does not strongly enough signal the body to perform autonomic functions. If it does not do its job, then the more primitive parasympathetic nervous system, dominates, resulting in a chronic flight or fight response by the body. This has many consequences which can result in symptoms, behaviors and health issues frequently associated with autism.

In more primitive non-mammalian animals such as reptiles, Dr. Porges proposes that they do not experience emotions such as empathy and love. These emotions are what enables social animals to live in social groups, to pay attention to social cues, to communicate, to bond, to work together in groups, to nurture and raise offspring. The vagus nerve provides the neurological support needed for living in a social group. It also regulates breathing, heart-rate and digestive activity when the body is in a relaxed state. The vagus nerve overrides sympathetic nervous system’s propensity to flee from close proximity to other creatures.

In the head, the vagus nerve controls muscle tone in the ears, impacting how well we hear. It also controls how eyes focus and attend to other people and works in conjunction with oxytocin receptors in the brain, which stimulate feelings of bonding, attraction, and love.

The diagram below shows some of the the vagus nerves connections in the body. It regulates heart-beat, lung expansion, digestion and stimulates the production of digestive and anti-stress enzymes and hormones (such as acetylcholine, vasopressin, and oxytocin).  Interestingly, the vagus nerve uses the neurotransmitter acetylcholine.  The vagus nerve manages the complex processes in the digestive tract, including signalling muscles in the stomach to contract and push food into the small intestine and to secrete substances that properly digest food, including pepsin and intrinsic factor.

The heavy metal, mercury, blocks the action of acetylcholine, blocking or reducing the signalling of the vagus nerve to other parts of the body. 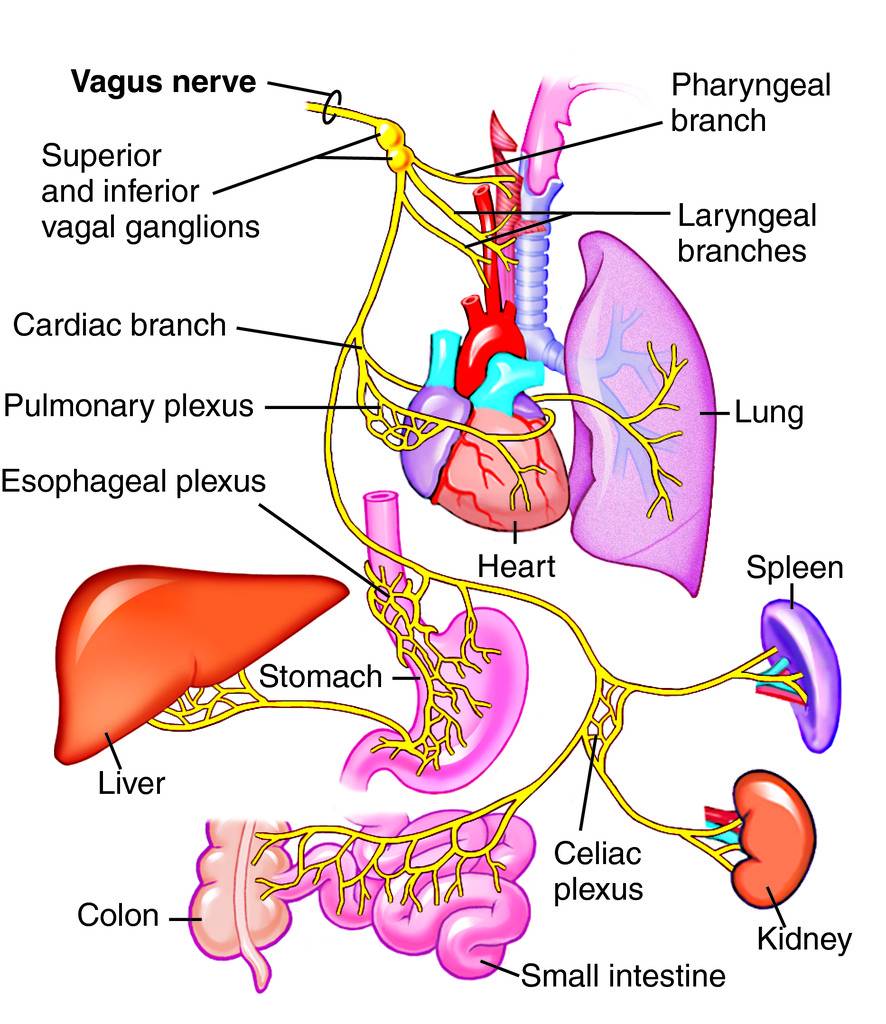 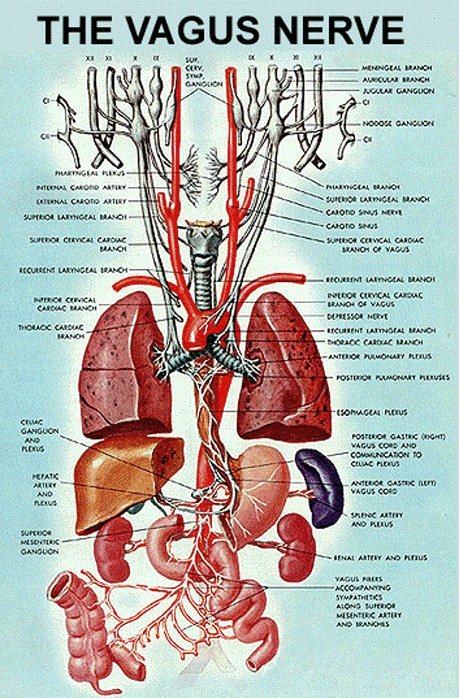 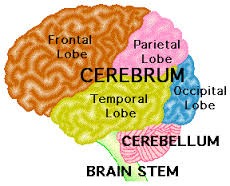 Signals from the human body are delivered from the initial receptors of touch, sight, smell, pressure sense and balance to the spinal nerve roots and on to the spinal cord where they are delivered to the lower part of the brain called the cerebellum. The brain is fed by these important signals and develops its response to the environment based on the information they convey.

The cerebellum was once thought to coordinate movement. We now know that the cerebellum controls all impulses including thought. The signals are transmitted to the brain cortex (the outer layer of neural tissue in humans) where it provides an increase in the frequency of firing which helps keep the brain viable and healthy. Without this stimulation the brain loses its ability to actively control basic functions regulating everything from breathing to pain regulation.

It is the brain stem malfunctioning, where the vagus nerve originates, which causes many of the symptoms of autism. When the cortex receives insufficient input from the cerebellum it becomes incapable of properly controlling the brainstem functions. When the vagus nerve is underactive, it results in an uncontrolled overactive mid-brain which creates imbalances in cranial nerve function.  These imbalances, in turn, can cause sensory distortions such as photophobia (sensitivity to light), dizziness, inner ear pressure and sound distortion, problems with sleep, digestion difficulties, heart arrhythmias, as well as systemic pain and fatigue. The vagus nerve inhibits over-excitement, and when it is not functioning properly the mid-brain overfires.